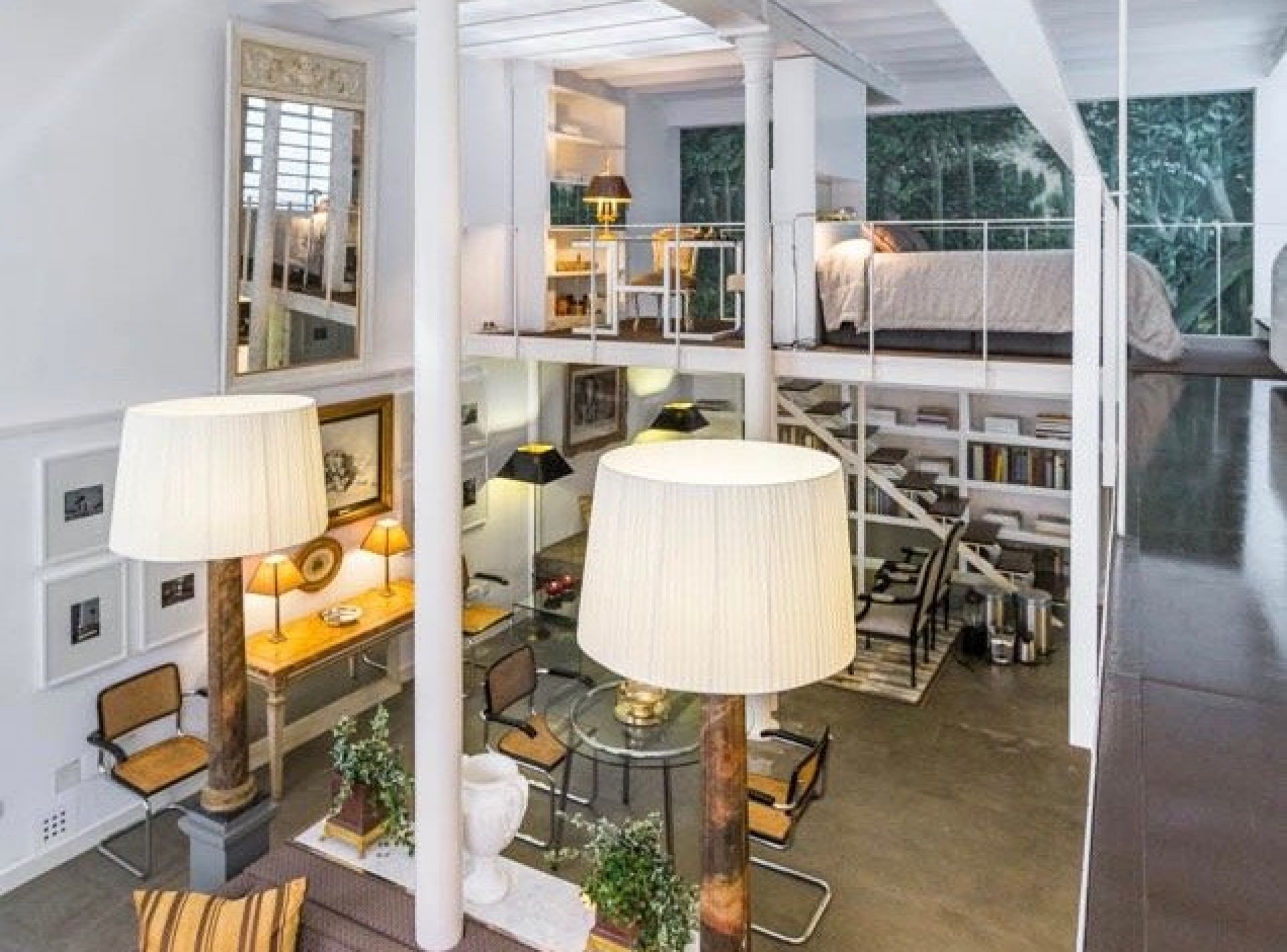 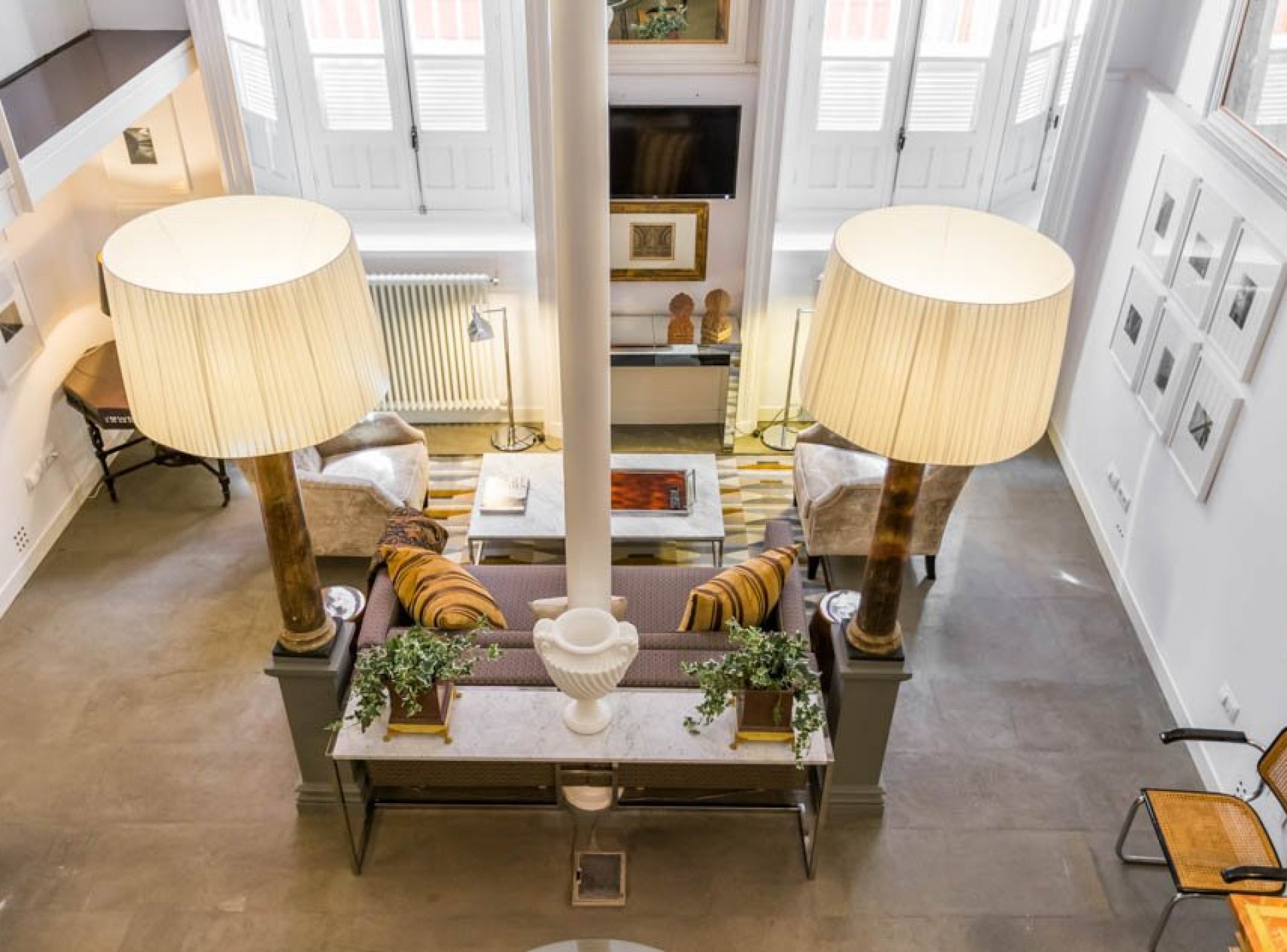 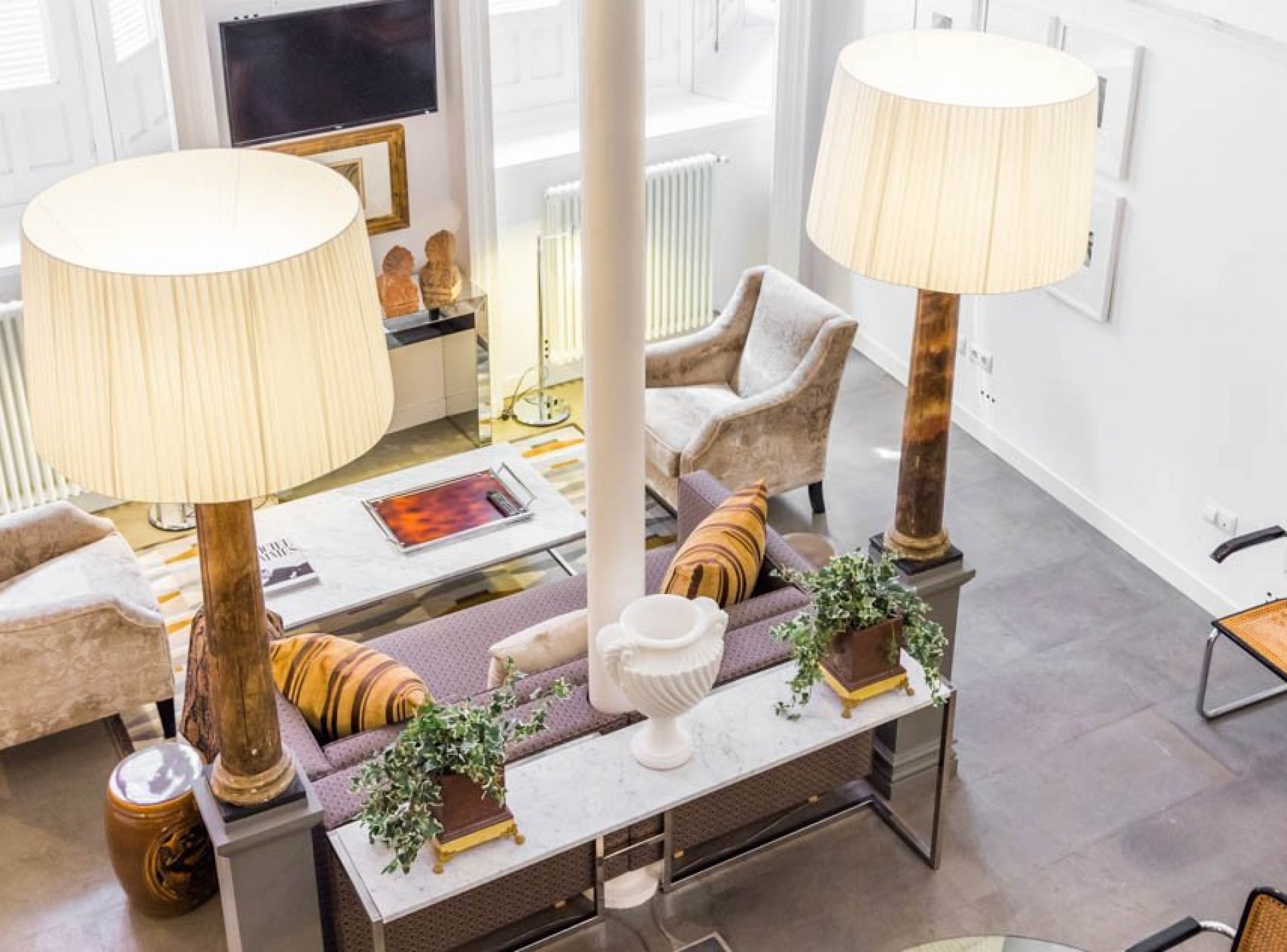 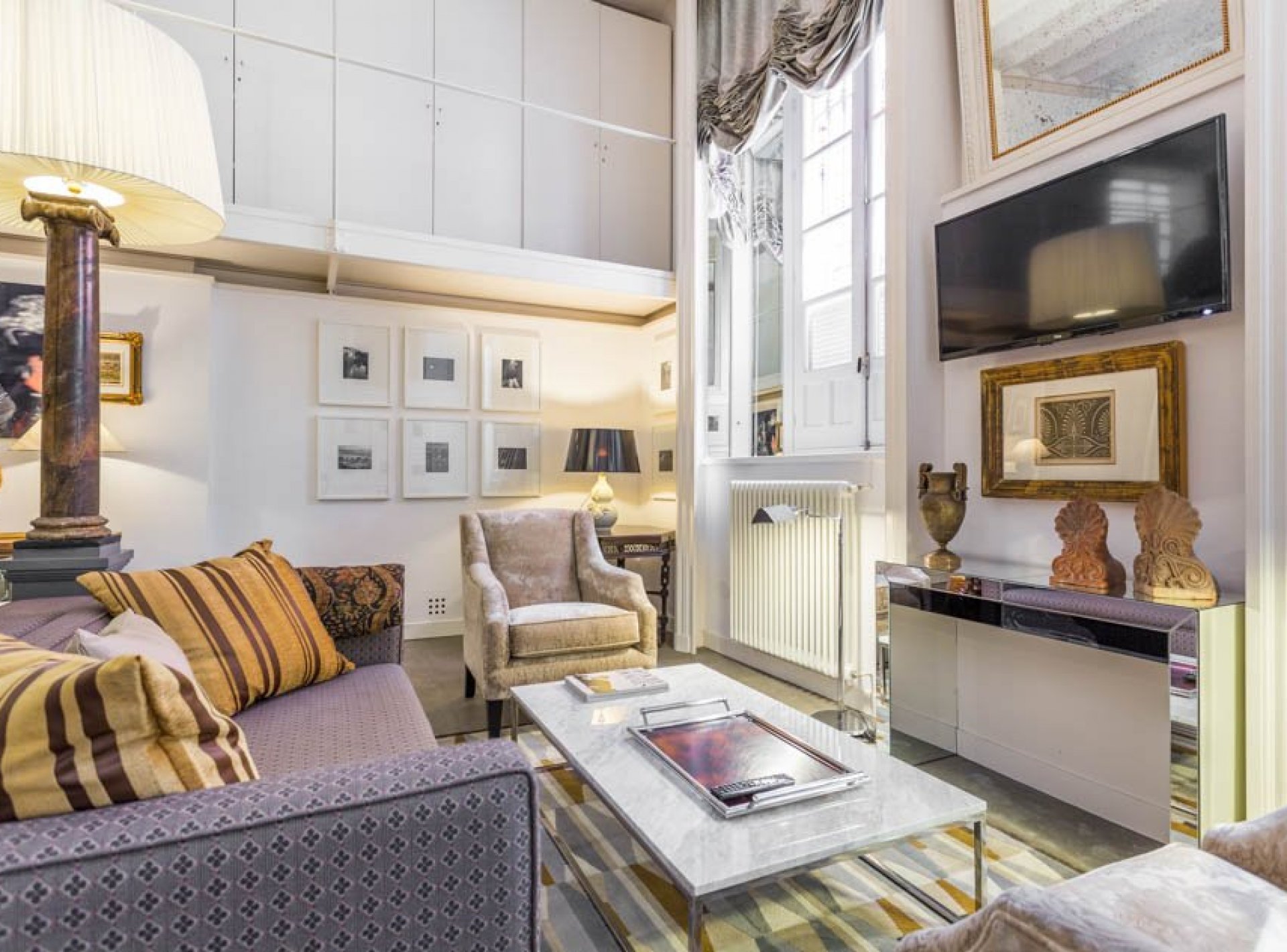 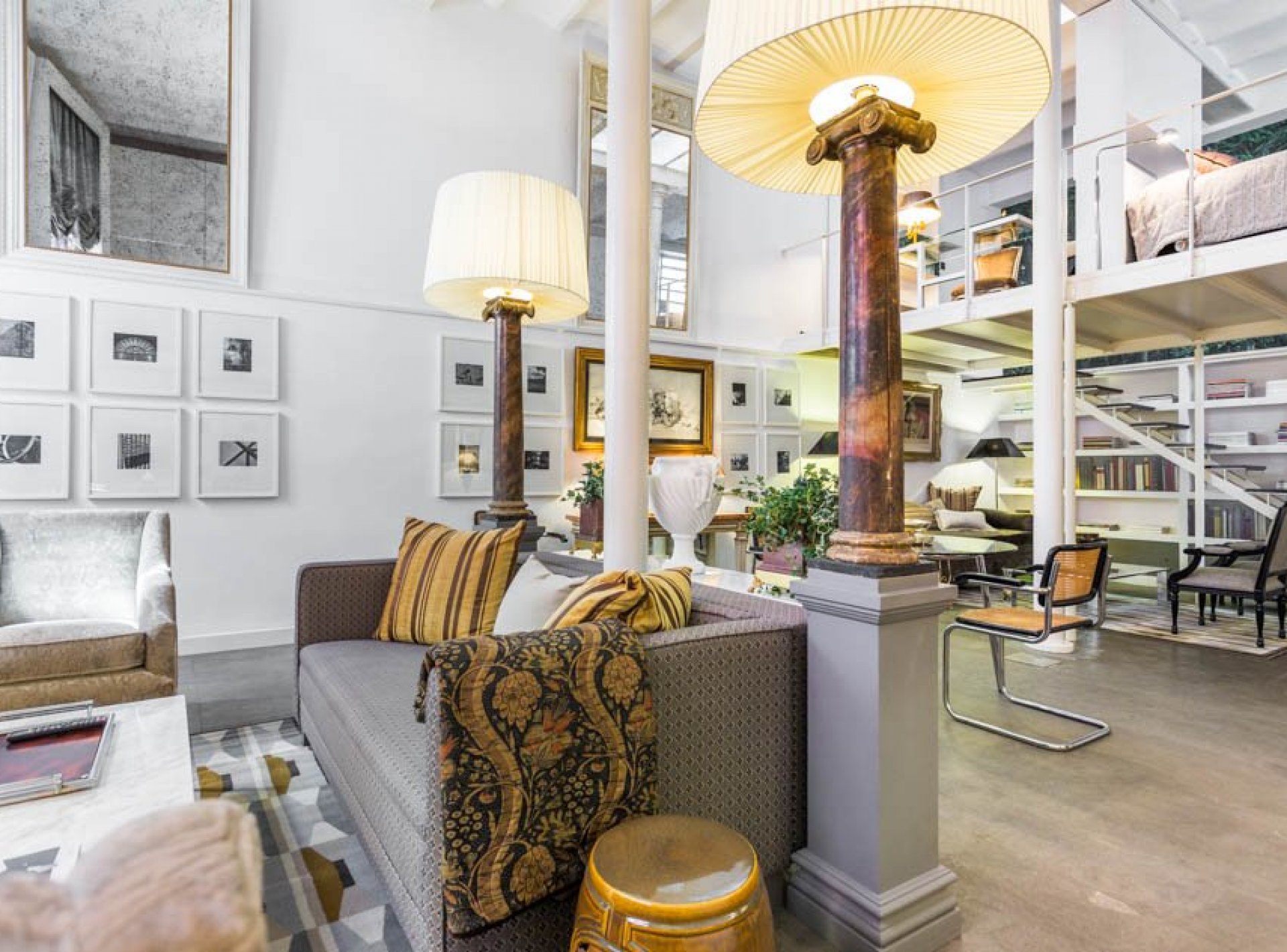 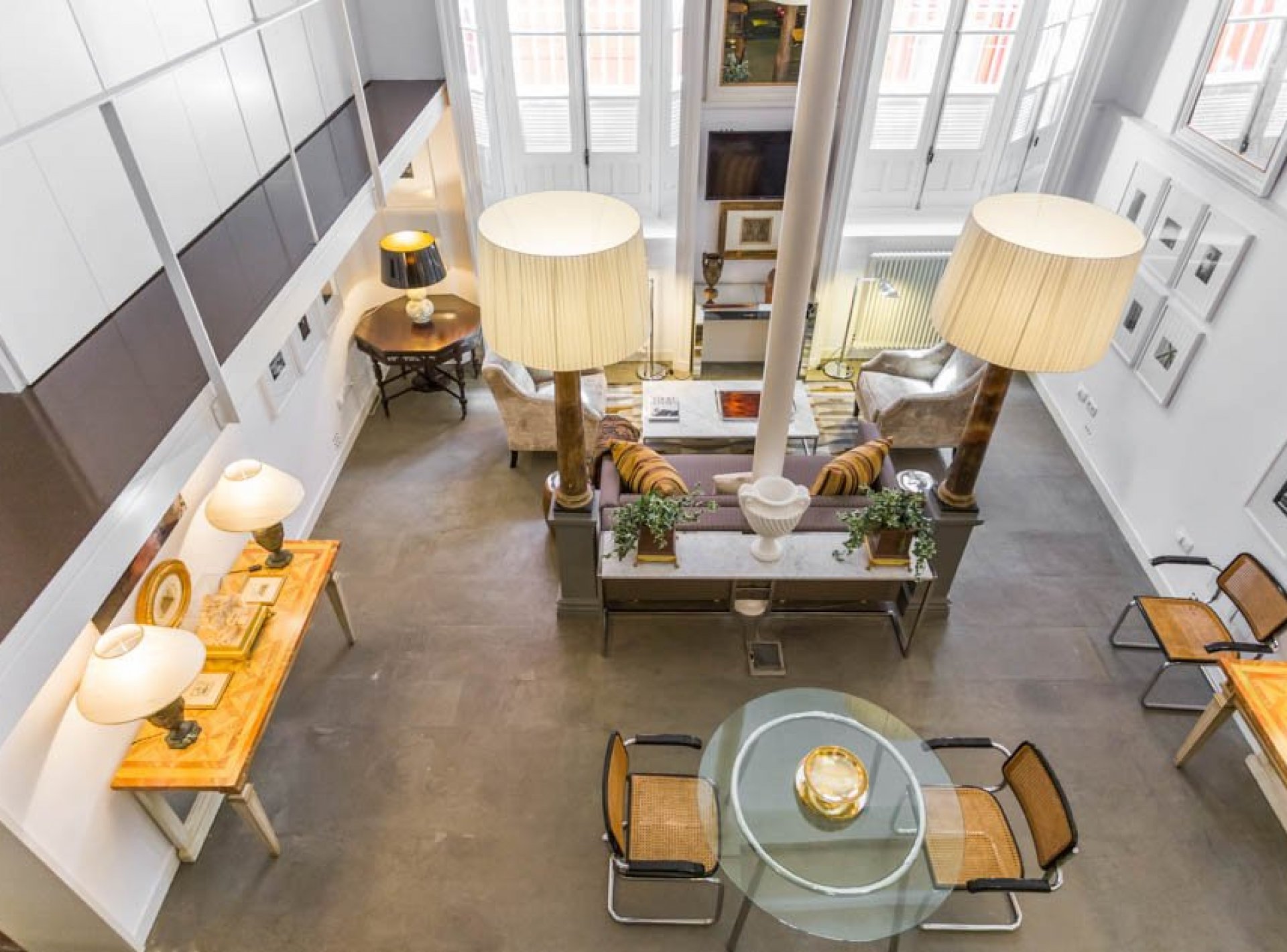 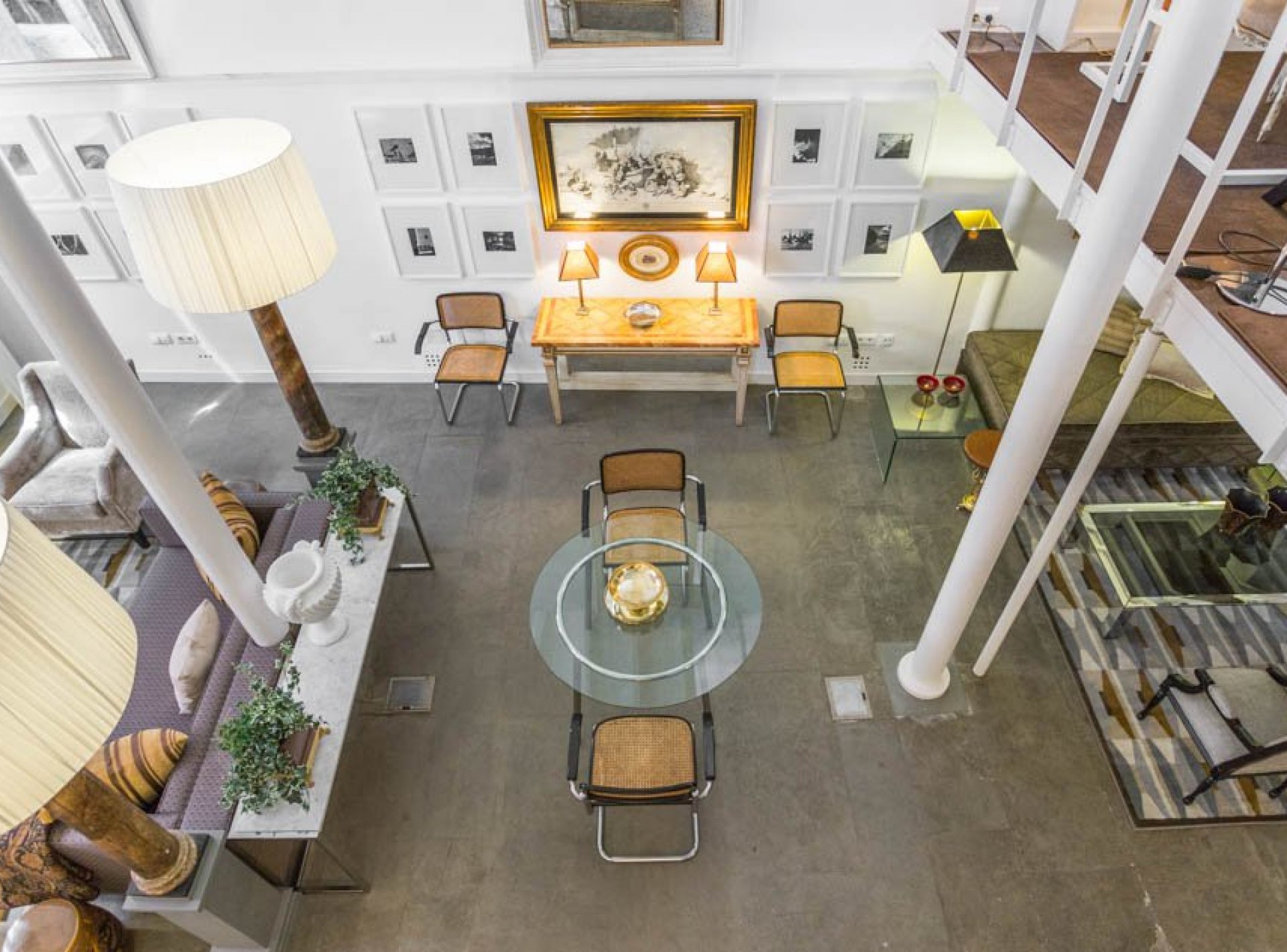 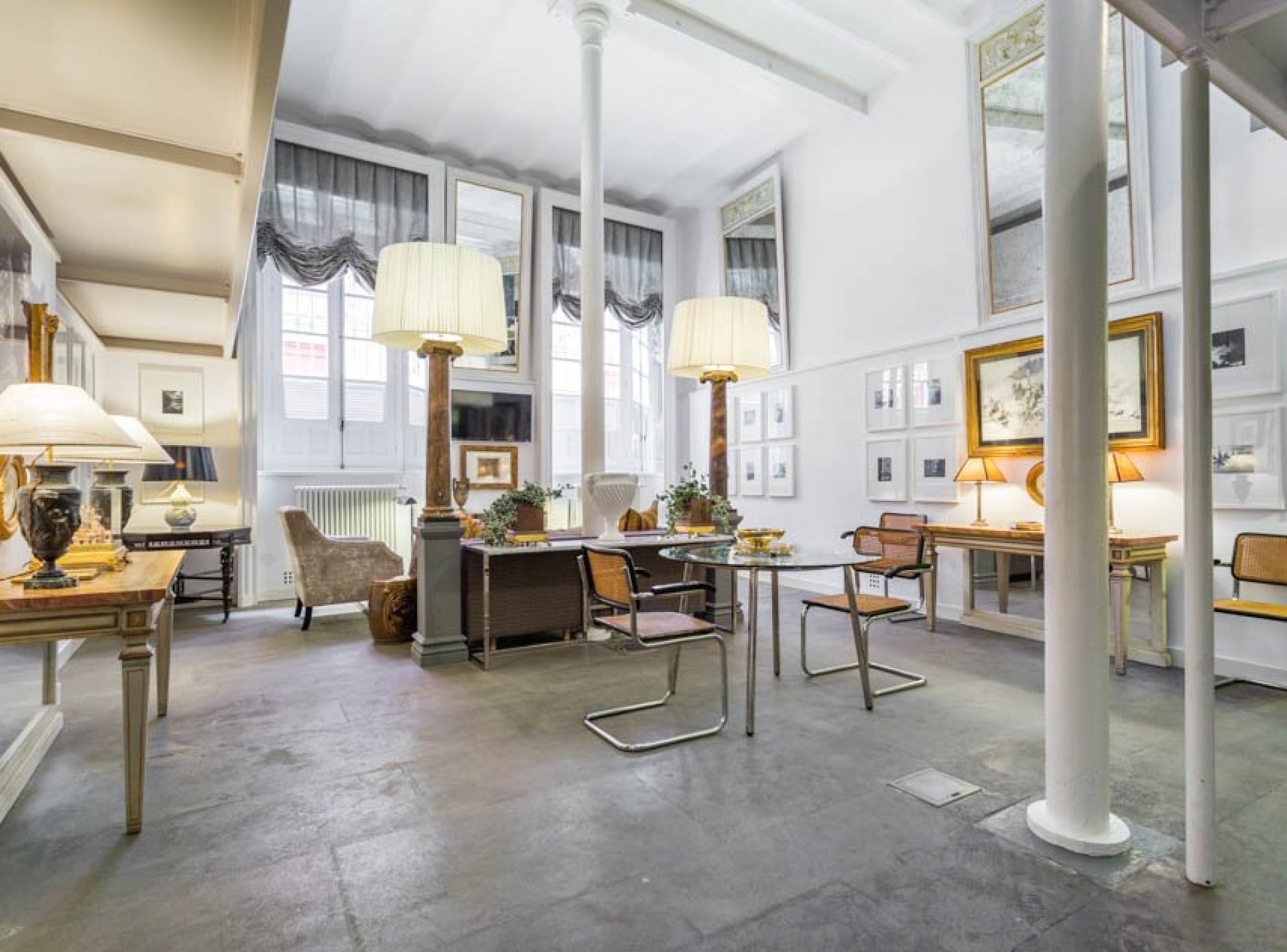 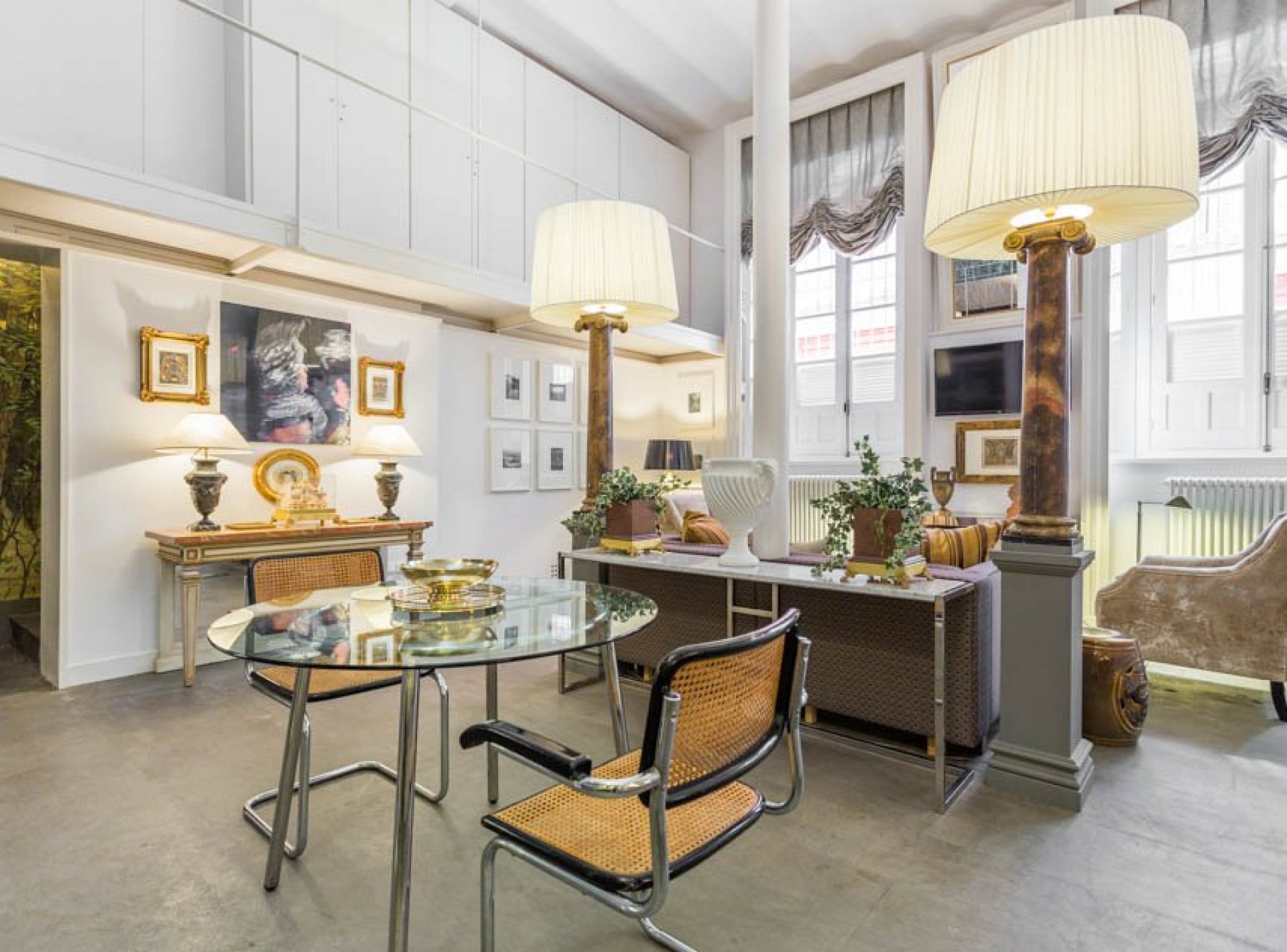 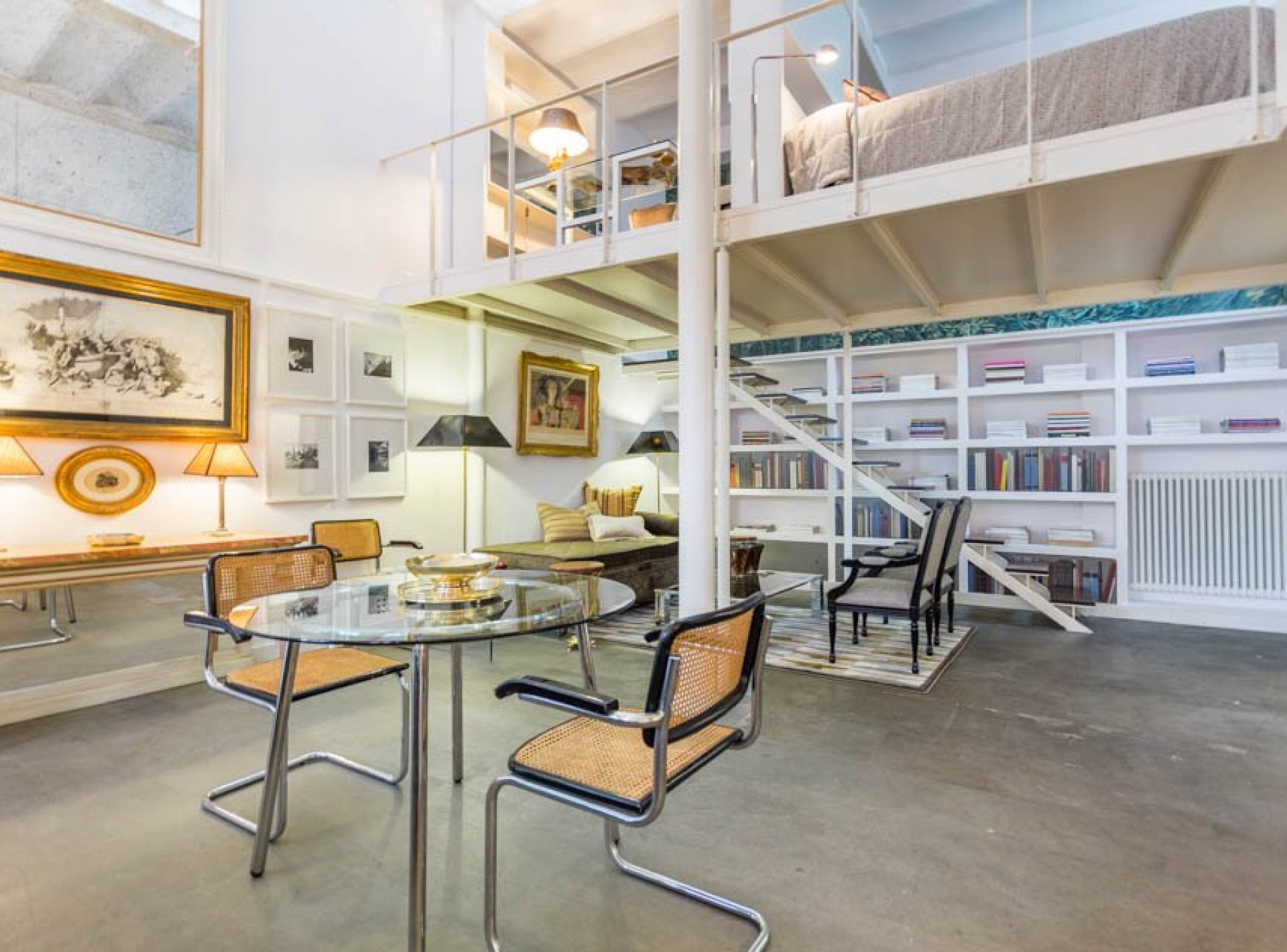 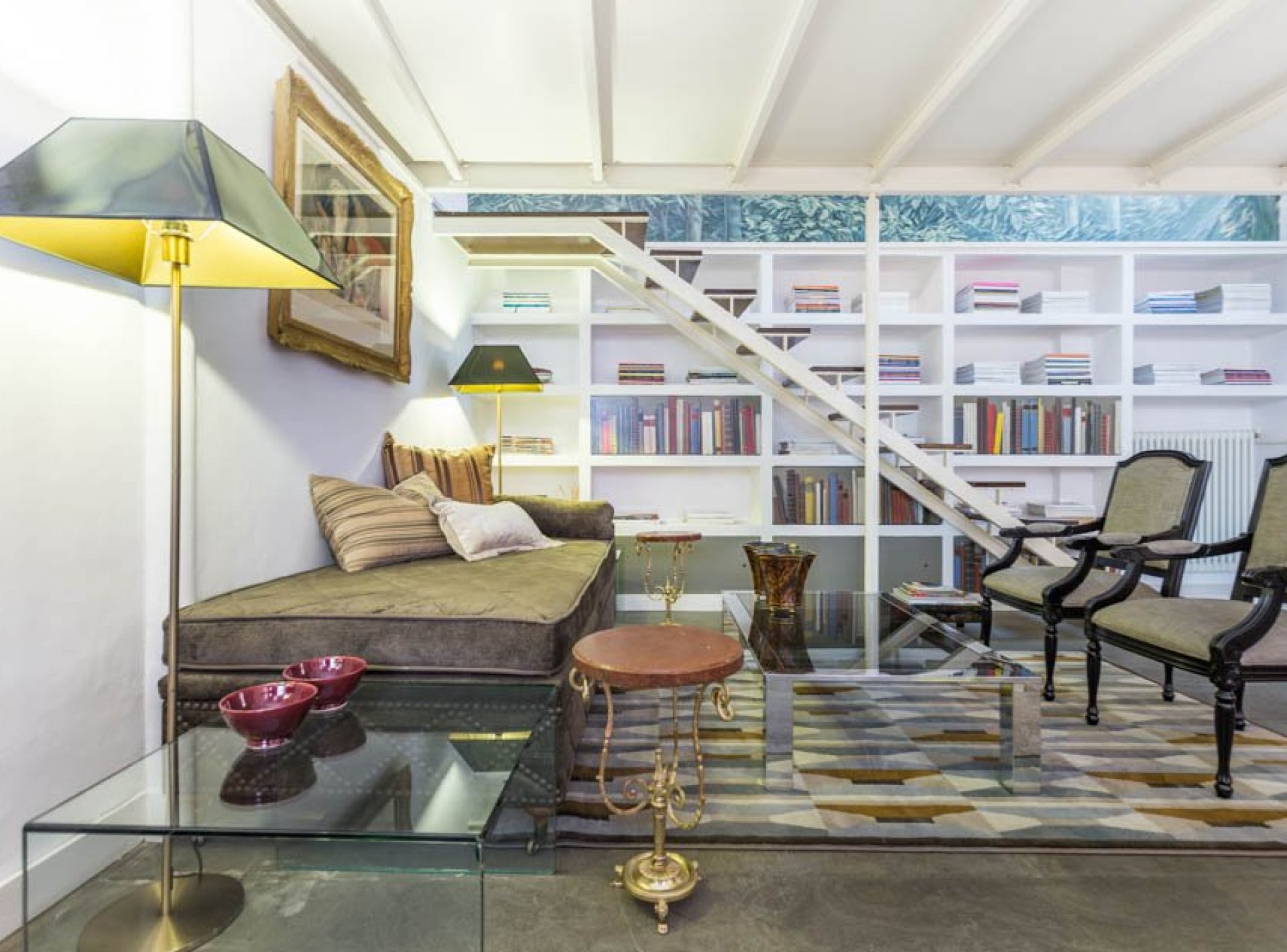 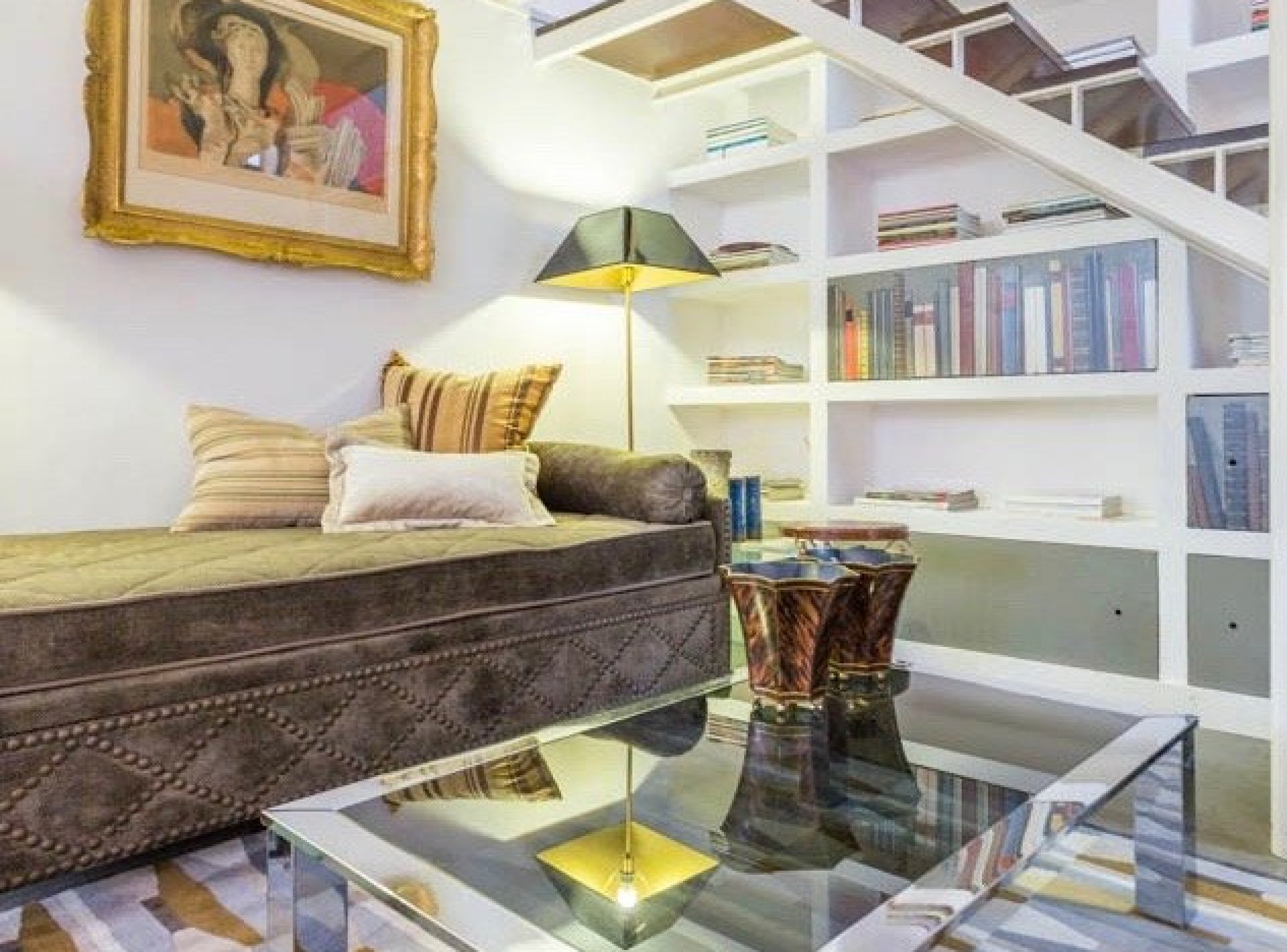 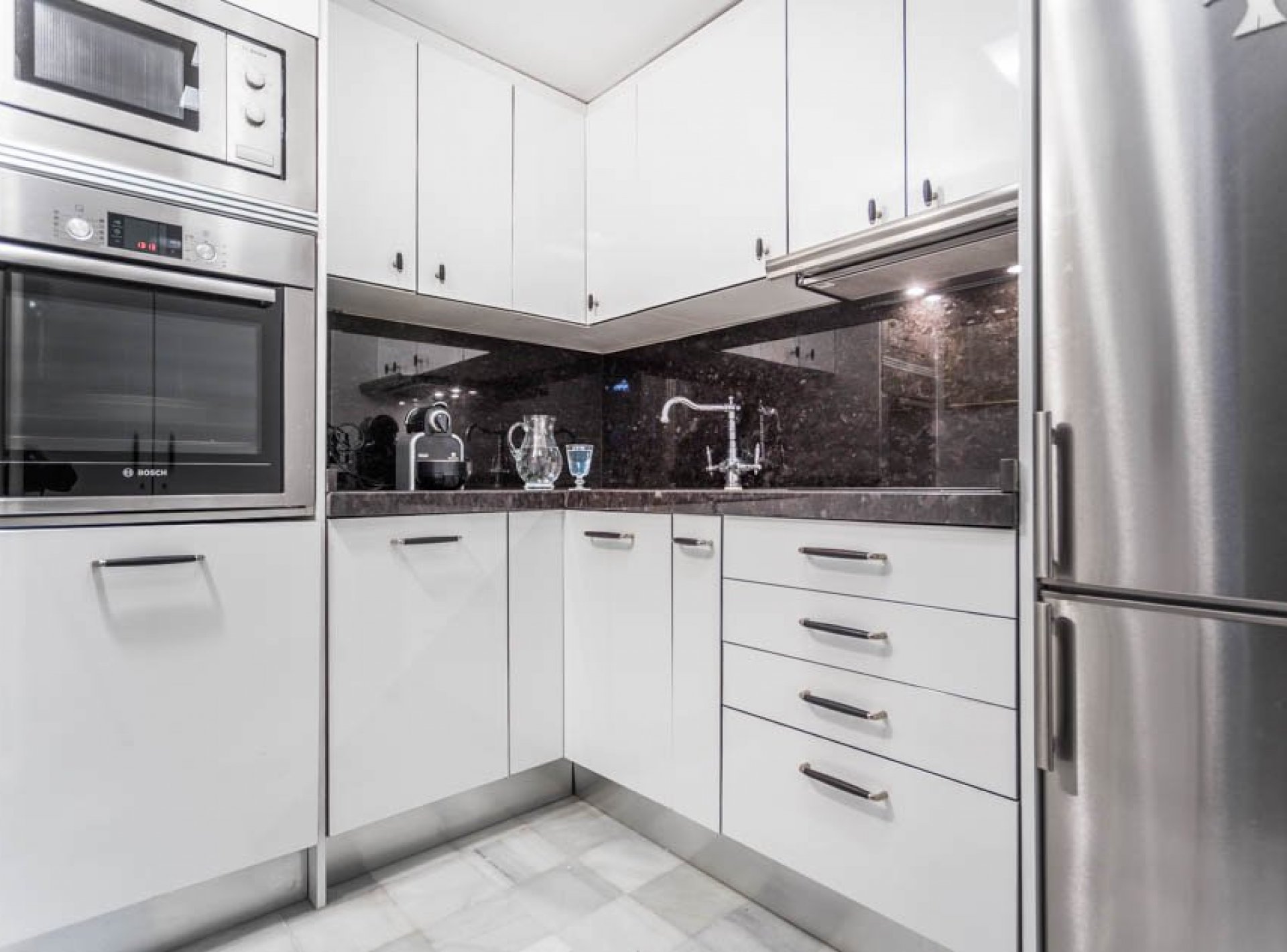 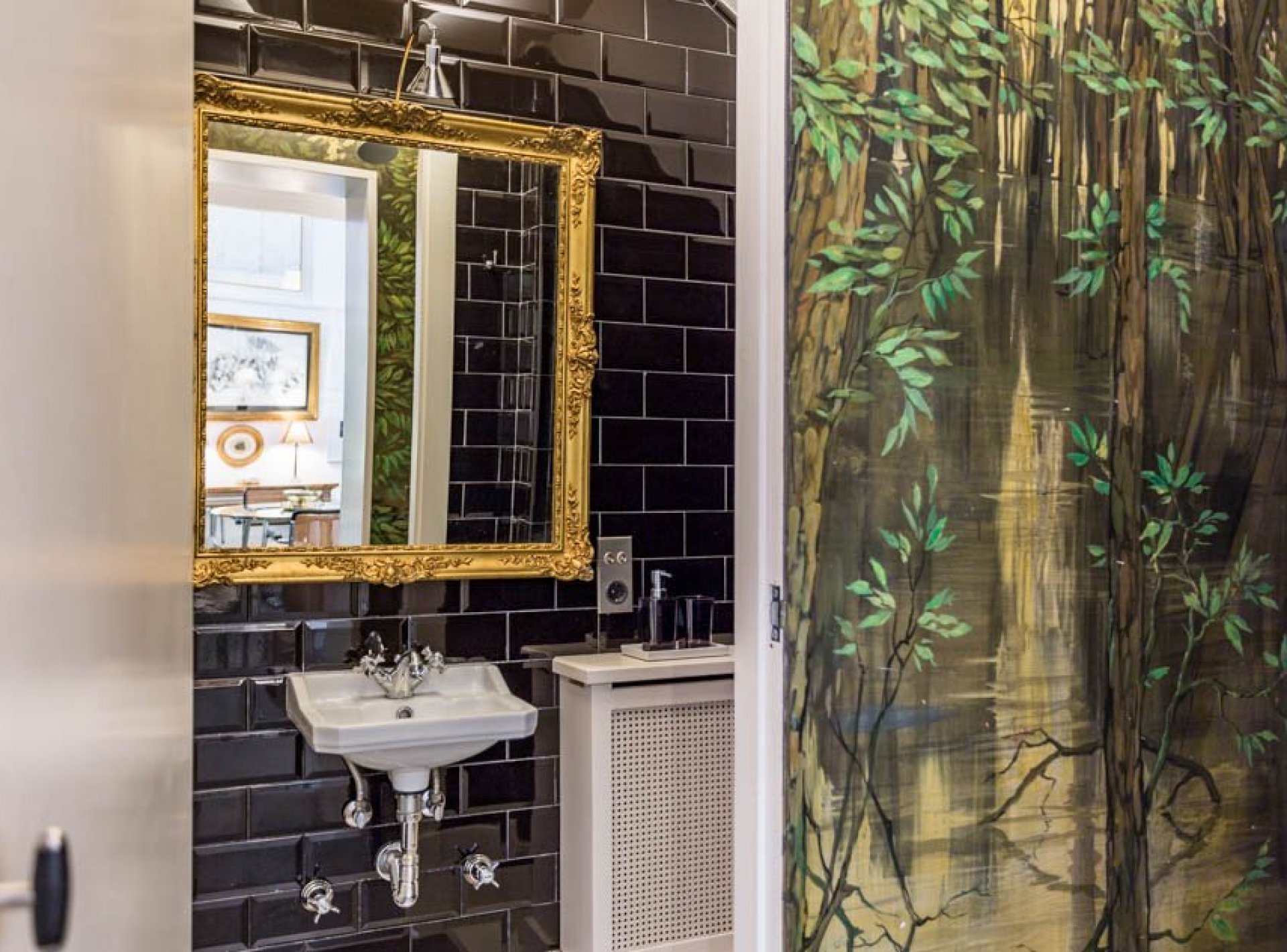 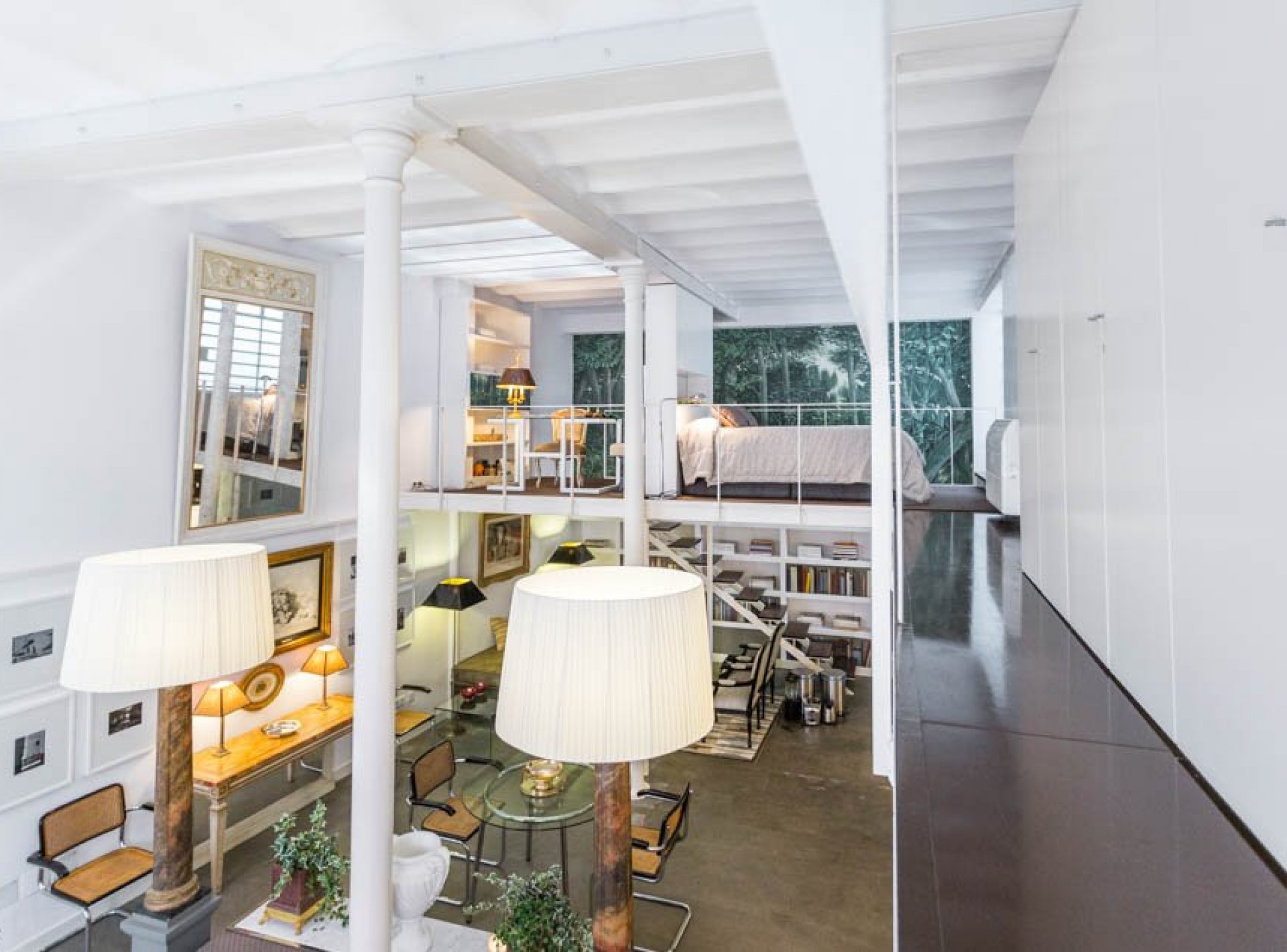 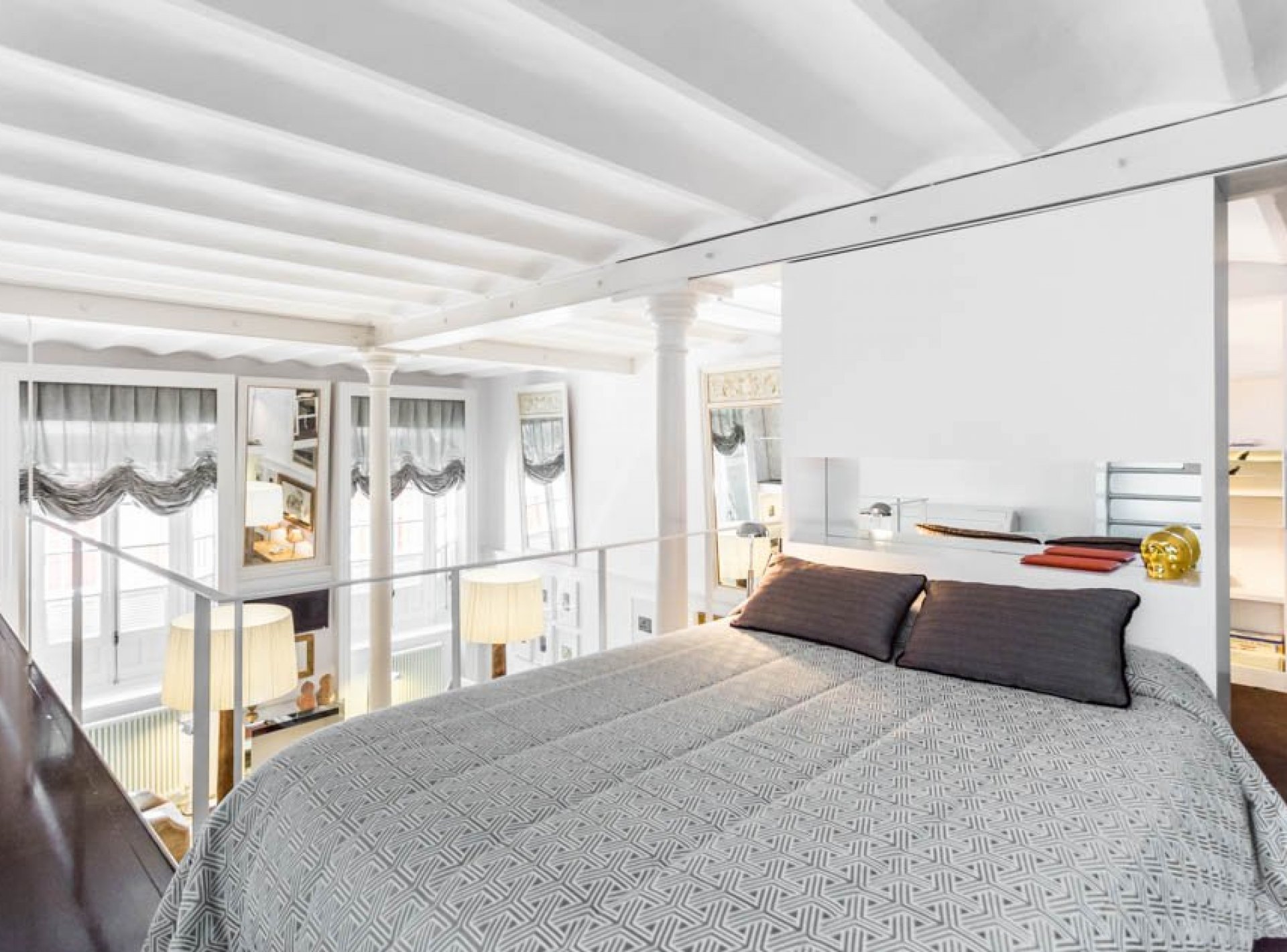 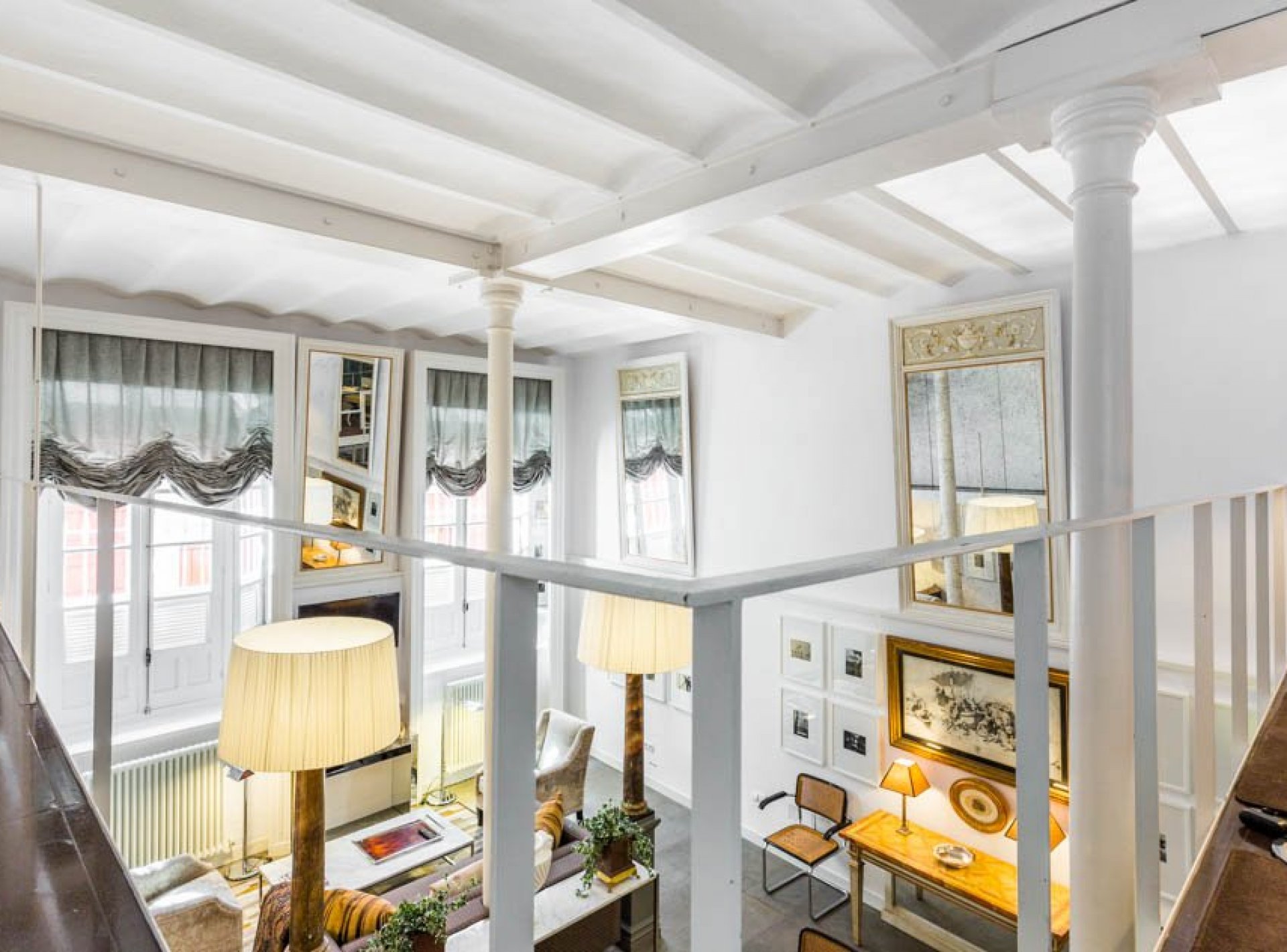 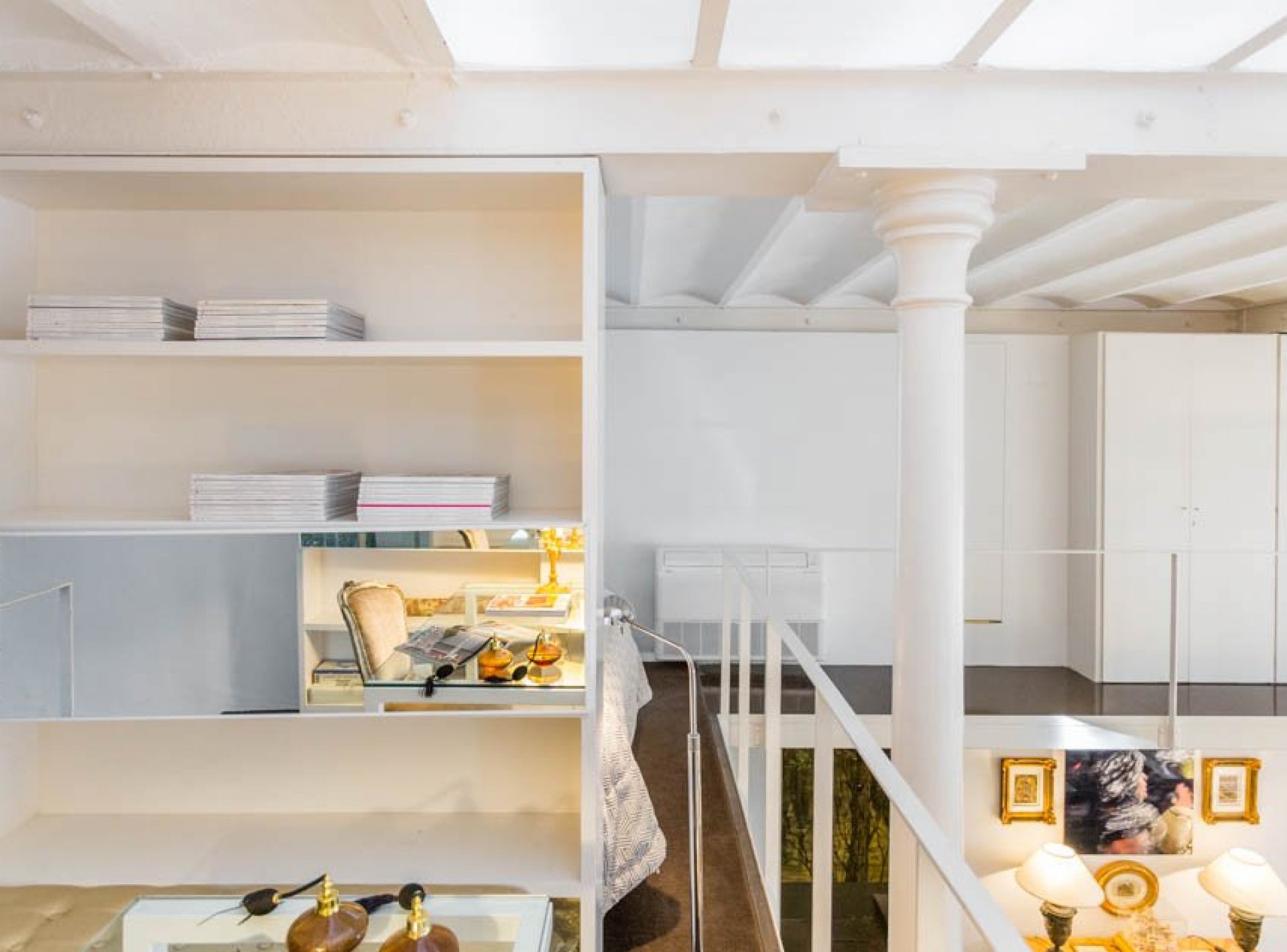 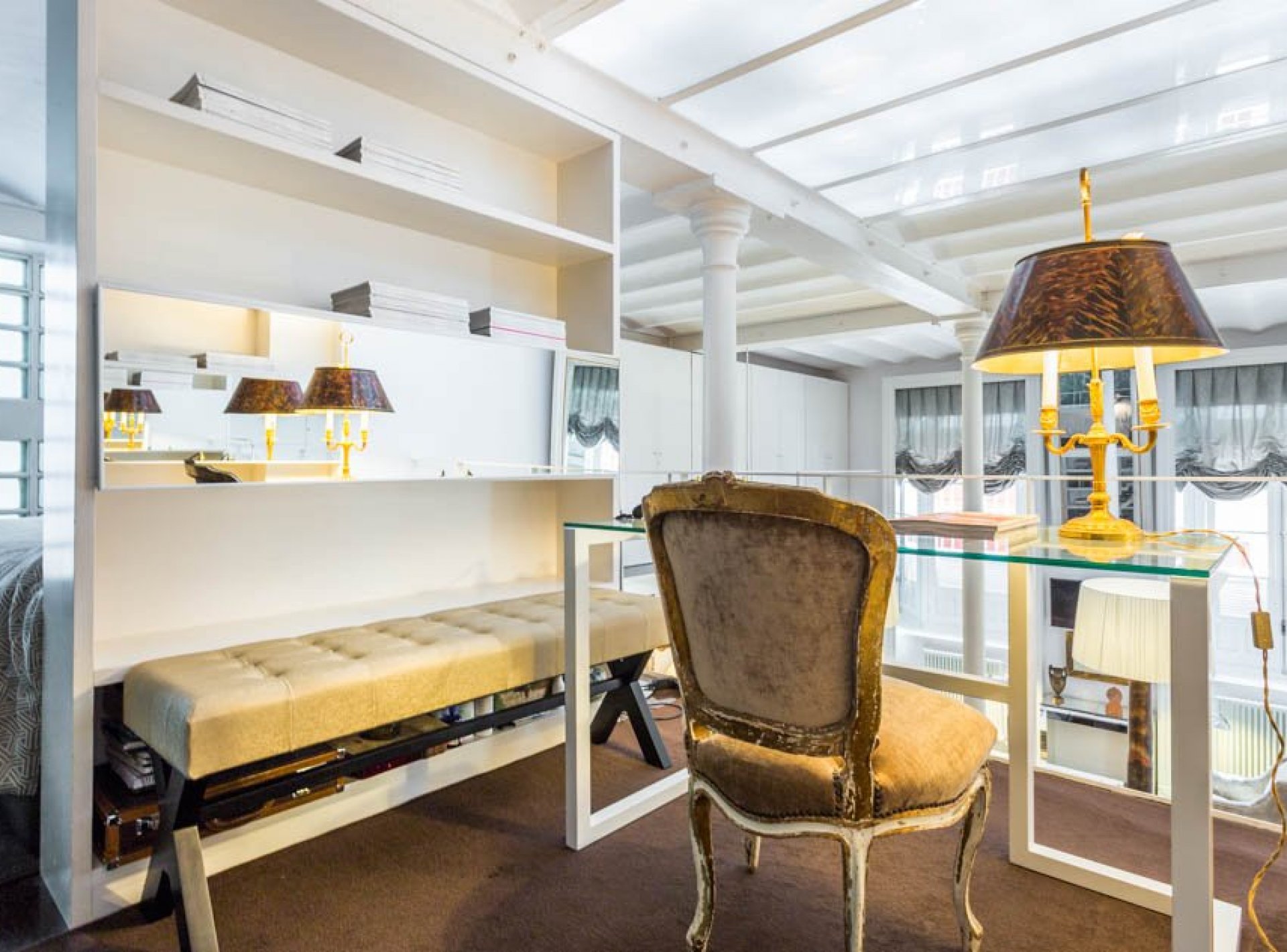 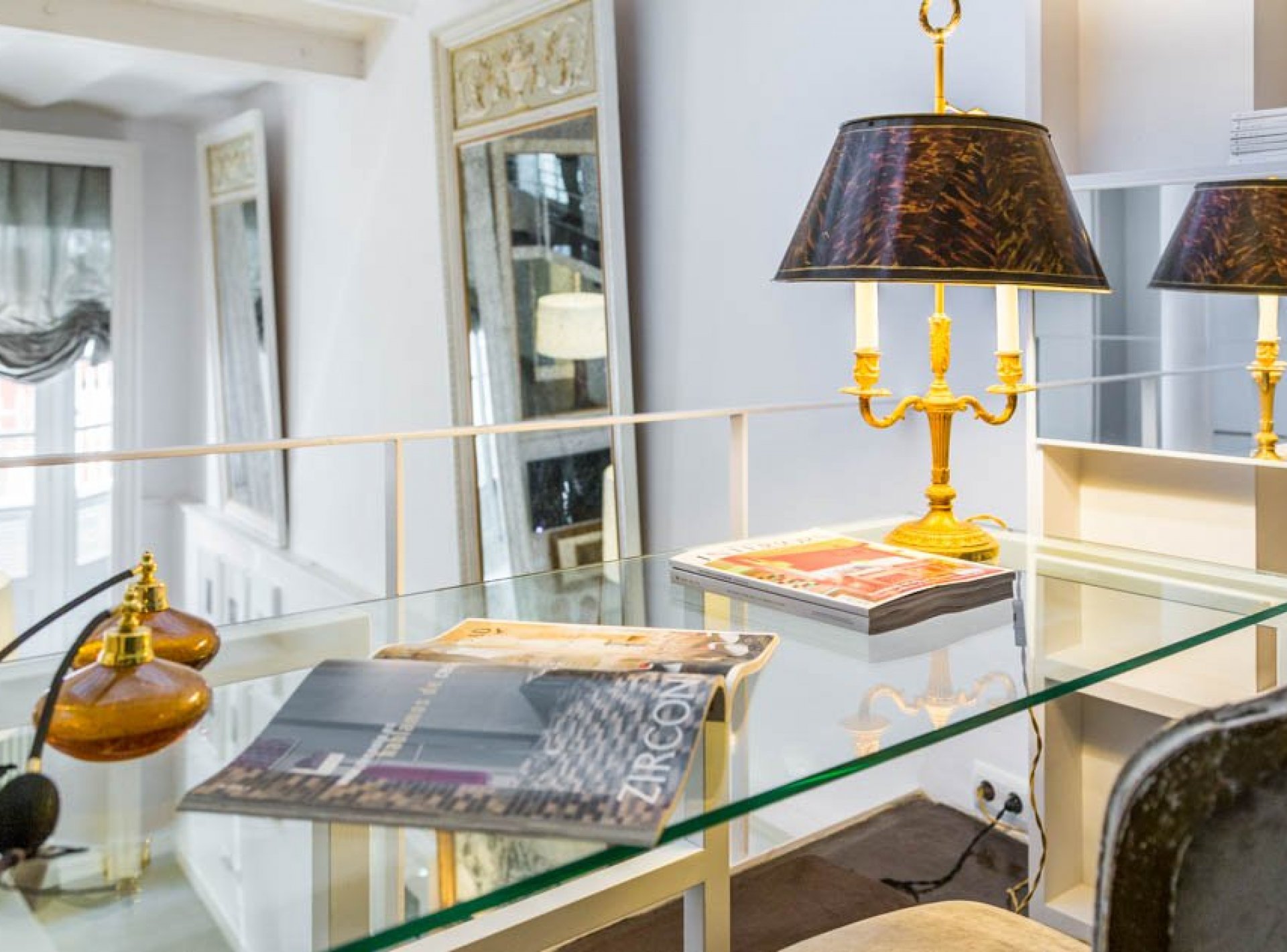 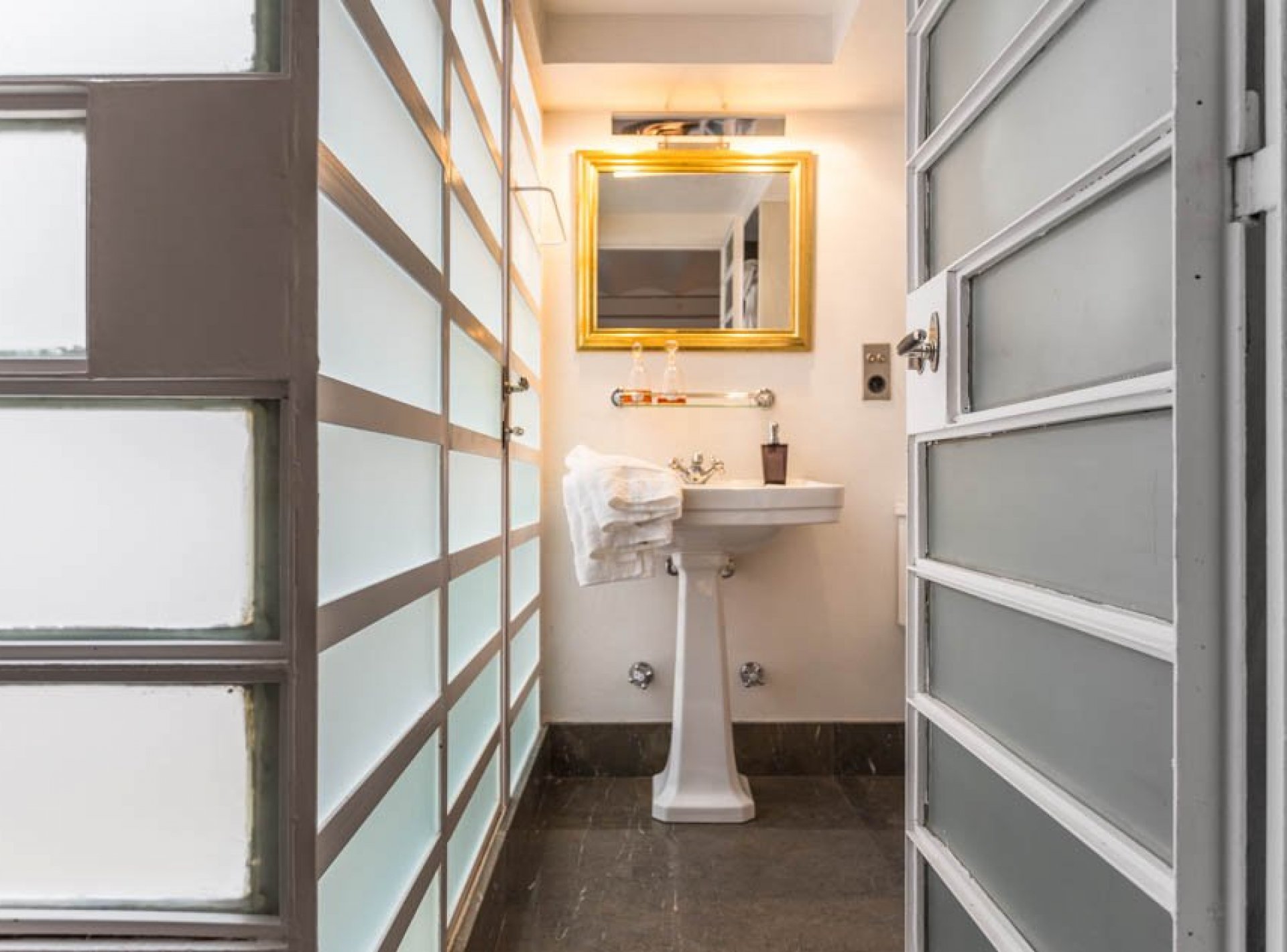 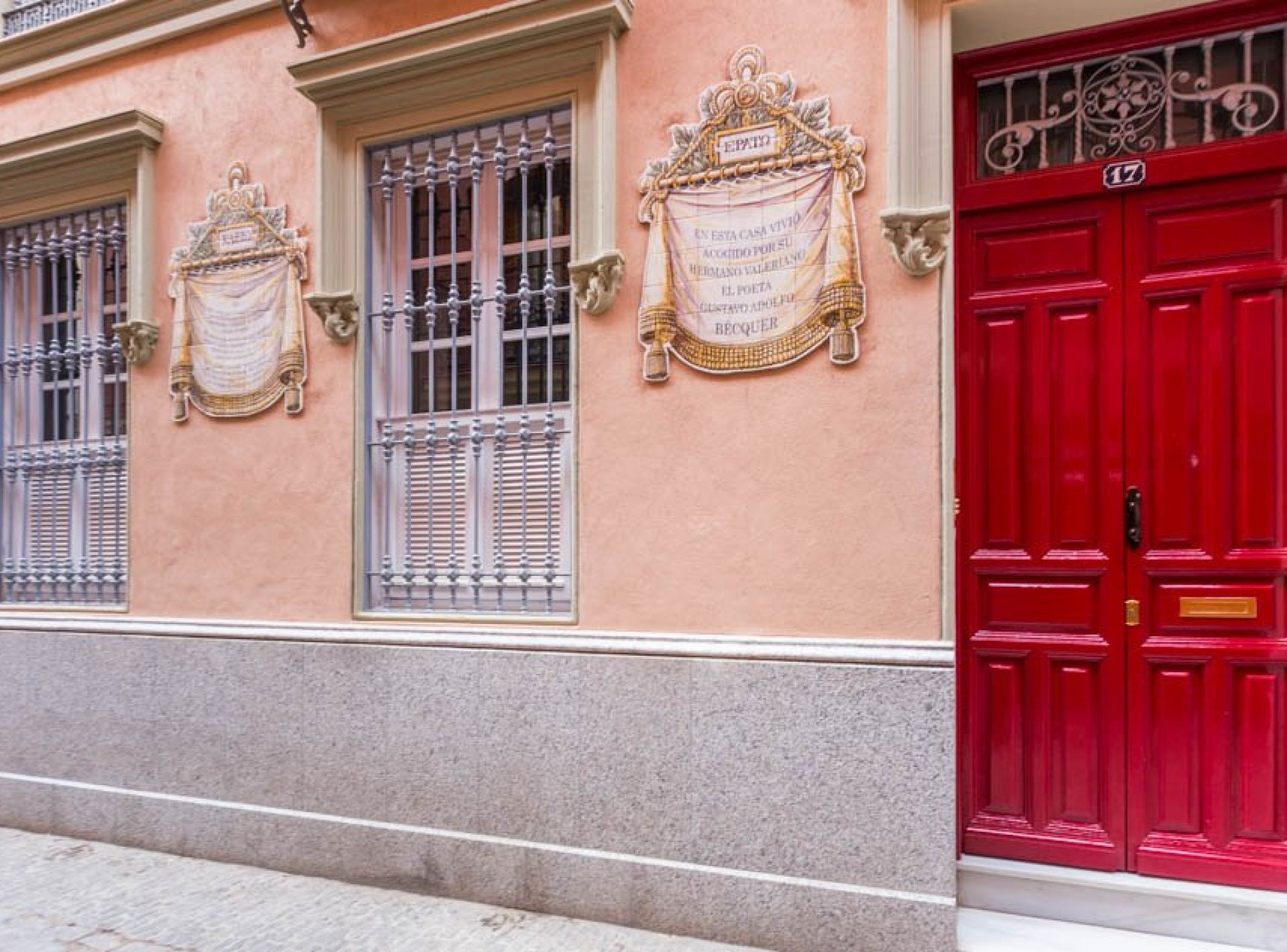 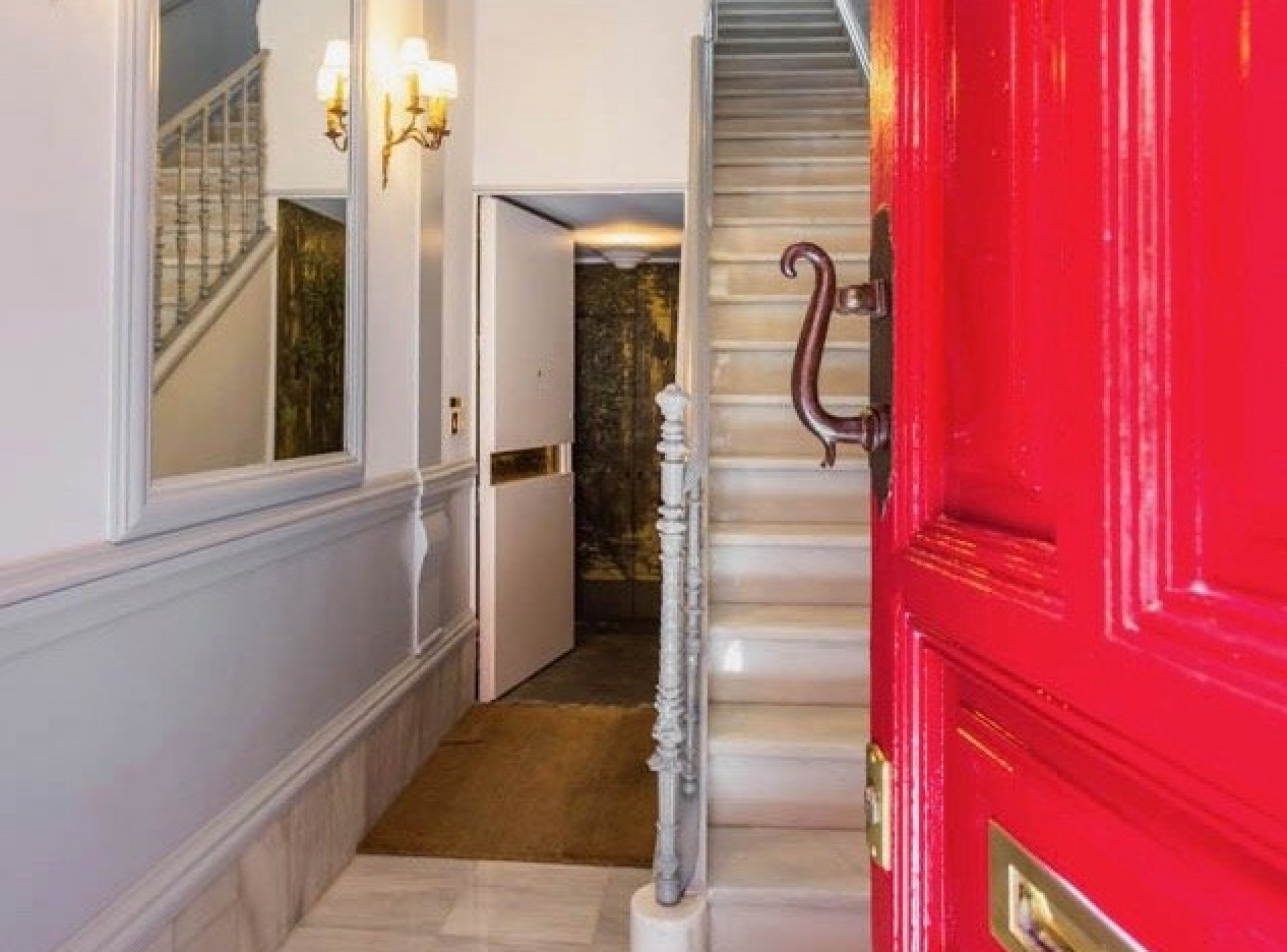 This romantic duplex loft, designed by renowned Sevillian interior designer Amaro Sánchez de Moya, has been converted into a dream home. The apartment is located in a typical 19th century Sevillian building, full of original architectural features and historical details, including heavy wooden beams and large iron columns. It was home to the painter Valeriano Bécquer, brother of the Spanish post-romanticist poet and author Gustavo Adolfo Becquer. What could be more romantic than that?

The property, a “modern container of old things”, as defined by the interior designer, property is spread across two levels and is located on the ground floor of a characterful Sevillian house. It greets its visitors with a landscape-painted wall which sets a theatrical tone for the rest of the interior.

The intelligent design takes advantage of the apartment’s various columns and iron pillars that separate the main living space into three distinct areas. The main sitting area is next to two large windows which dominate the room and bring in natural light throughout the day. It has a sound system and a flat screen TV that blends in with the décor in a subtle and non-strident way, as a decorative element in a healthy coexistence with the works of art and antiques dotted around the house. The delicate furniture is extremely comfortable and the sofa can be converted into a bed for one person.

Sánchez’s use of symmetry expertly emphasises the apartments theatrical atmosphere. In this particular case, two stunning lamps built on original French marble columns from the 17th century mark the start of the dining area. This simple space has a modern steel and glass table and four Chesca chairs, designed by Marcel Breuer in 1928.

Keeping to the Cartesian proportions of which Sanchez is so fond, on the other side of the dining area, a second sitting area mirrors the first. This time, it is a more formal reading area, with a large bookcase taking up the entirety of the back wall. The velvet ottoman sofa and French style chairs are complimented by ancillary furniture designed by Amaro’s own studio. This sofa can also be converted into a double sofa bed for two people.

The ground level also houses the kitchen, crisp, modern and fully equipped with white goods and appliances, all of the highest quality. Nearby there is a small, vintage style bathroom.

The upper floor is reached via an open staircase and comprises a completely open double bedroom and an office area partially separated by a wall that doubles as a headboard. The bedroom has a king-size bed and plenty of storage space in built-in wardrobes along the gallery. It is completely open to the bright living space, giving guests a constant view of the beautifully designed, romantic apartment with its white and gold tones, tall columns and Catalan vaulted ceiling. There is also a full bathroom.

Postigo de la Feria is just a short stroll away from the Plaza del Museo and Seville’s Museum of Fine Arts, one of Spain’s major art galleries boasting one of the most important collections of Spanish Baroque art. It is also very close to the city centre’s main shopping streets, the historical centre, the Guadalquivir river, the Maestranza bull ring, and the rest of the Seville’s main tourist and cultural hotspots.

Always Cheaper Than Others